Two for Tuesday: Chain of Memories

Good morning Tuesday! Today I have another piece that I started in 2008. This was actually my very first practice piece when I first took metals. It was a piercing and riveting assignment. I decided on a heart with some squiggles and spiky things. Why not? It's challenging, right? Yup. The scrap metal I found for the heart is steel. (My poor saw blades. *sigh*) And the other bits are aluminum.

Until last year, I let the piece sit around and mope until I found something to do with it. I eventually found the Soft Flex: Flex Your Creativity contest where they wanted designers to use their beading wire, but to have it exposed instead of hidden. This was my entry. You might want a picture before I continue: 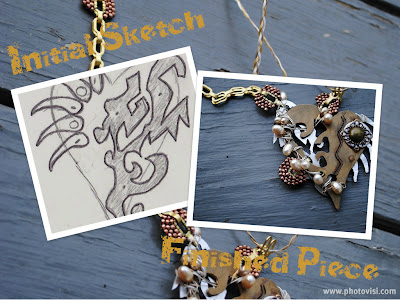 Photo collage made with photovisi.com.

I used one of their trios sets, which is what my local Hobby Lobby carries, to create a mass of squiggles and pearls all over what is now the front of the heart. I also used the beading wire to make a braided cord for one half of the neck strap.

By now, most of my followers may know that I absolutely love working with found objects. I get it from my mom. For this piece, I glued a stud that came off a pair of pants to a filigree square, and then glued both of them to a washer, which was then glued to the heart. Okay, I rarely use that much glue, but sometimes E6000 is the only solution when nothing else works or you're in a hurry, which I probably was to make the September 1st deadline.

I also brick stitched around parts of a dog chain I found at Wal-Mart. I have no idea what possessed me to buy the dog chain, but it has come in handy a few times. This piece came out wonderfully like the initial sketch, and then I added to it when an opportunity presented itself. One of my friends named it Chain of Memories because he said it reminded him of Kingdom Heats (which he was playing at the time of the conversation).

A little bit on the chaotic side, Chain of Memories ended up being a successful piece. This goes to show that you should always hold on to your first attempts at something. It might be useful later.