I was ten when I first picked up needle and thread. For some strange reason I cannot recall, Dee Ann's mother decided it might be fun to teach a room full of nine and ten year olds how to make a peyote stitched needle case. With diagonal stripes nonetheless. Yikes. Sounds like a disaster waiting to happen.

Mrs. Cruz proceeded to instruct us. Since my memory of fourth grade is a little foggy, I don't quite remember the details. I do however recall that several people had quite a lot of difficulty. When I went up to Mrs. Cruz and Mrs. Jaramillo (my fourth grade teacher) to see if I was doing it right, Mrs. J looked straight at me and said, "No." No explanation of how to fix it. Nothing. Go sit back down and keep trying. Of course I insisted I was, the stubborn little brat I was. Little did I know that years later I would later develop a liking for free form peyote stitch, where increasing by accident poses very few problems. Those were my humble beginnings!

I remember thinking that it was a disastrously stupid idea to store the beads on foam plates ON THE GROUND where people could step on them. Guess what happened? Bingo! One of the other teachers in the building sent black and red Czech beads flying across the floor, as if the things were having a high speed race. After lasting only a few days, this epic disaster signaled the end of an otherwise fun experience for little me and my classmates.

Although I do not have a picture of what I was working on, here is something in the same color scheme: 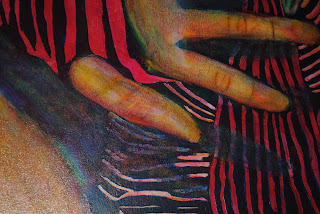 Alright, so it's not beadwork, but I have to show off my paintings too, right? Or at least part of one of them. Graciously taken by the keen eye of the wonderful Jenna Dixon. *insert plug for girlfriend's website*

Anyway, my real passion for beadwork was not fully ignited until three years later. Check back to hear about me and my ridiculous beady adventures in: