So here it is!!!! This is the first thing I ever successfully beaded. You notice I said beaded and not completed. Obviously, the moon and stars loomed whatever-I-was-going-to-make never got finished. And I never will.

So yeah. I started off by looming. And hated it. Well, at least I hated tying in the threads. I later read about a technique for not having to do that on bracelet sized pieces, but still. Warp threads are EVIL!!!!

I think it's kinda cute, plastic beads and all. The colored pencil pattern sort of shows up here. Forgive me; I'm rambling. 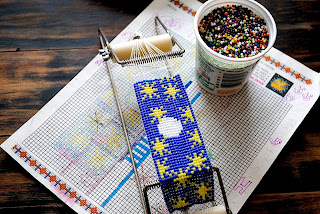 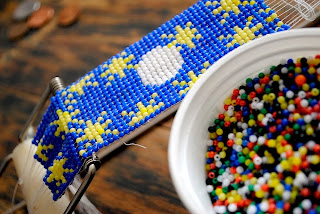 This is what I'm working on now. I honestly never thought I would touch another loom in my life. I still have an unfinished 12'x12' version of Starry Night (10 colors) on a wooden loom I bought off of Ebay. I also have a WAAAYYYY outdated version of BeadCreator software that I used to make the pattern. The last time I touched that thing was six years ago, when I was 16.

......then I met Jenna. She requested a beaded hatband for her fedora since the one that came with it came unglued. Loomwork is the only quick solution for such a request. She also wants it to have a Greek border pattern. She also picked the color scheme: 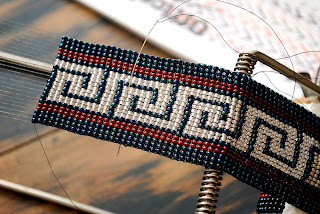 A couple of weeks after I started the project, we found a matching tie at a thrift store! 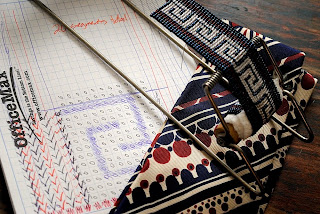 I haven't finished the hatband just yet, but only because I ran out of warp thread (Fireline this time. :-) ). I estimated too short and have to finish up the last couple of inches with square stitch. As always, tying in the warp threads was a huge pain. I have until May 13th. Otherwise, I will feel terrible. Nobody else in the world could convince me to do loom work free of charge.

Tune in next time for:

Tamara Did What with Washers?