Alright, for several years I have wanted to create a beaded mask. I knew I didn't want to use a foundation to work off of, but instead make a free standing structure. Until I came across this Venus of the Sea Mask by Catherine of Beadmatrix, I had no idea what direction to go in. Her creation can be found here:
http://www.etsy.com/listing/14678469/venus-of-the-sea-mask

Using brick stitch as a starting point is what I needed. I started work on my mask last August. Here is the picture of my first few rounds:

And with the original swan I cut out of copper:

Not keeping the eyes ovals was my first mistake, but little did I know the consequences of being a beady smart alec and trying to mimic the shape of actual human eyes. For those of you wanting to make a beaded mask, keep it simple, stupid. That will save you a lot of grief and heartache later down the road. KISS!
Continuing onward: After much struggling to keep my beadwork flat, I gave up the chase. Art is all about compromise is it not? So here are the next several rounds taking on a life of their own. Notice the beginning of a defined brow ridge. Evidently I was thinking of my brother's facial features or something.... 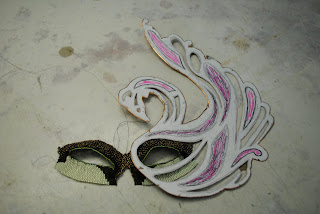 Things only got worse from there! How you say? Oh just watch......the dumb thing started to permanently wink at me! Look... 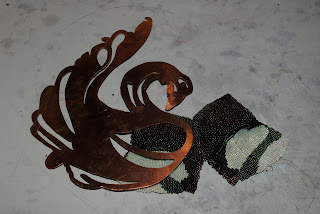 Do you see that? The eyes aren't even open. Not one bit! Grrr..... It's bad enough when guys constantly hit on me, but my own beadwork? I can't have that. So, you know what I did? You guessed it, I sewed in some new eyes and gouged out the old ones with my handy scissors!!!!! Mwahahahahaaaa!......

Yeah, I don't have a picture of that step, as much as I would love to show you the insane amount of flyaway thread, exploding levels of green and brown beady blood, and general chaotic frenzy. Don't worry. I fixed it all up over the week or so of snow days. You can hardly see the suture marks and surgery scars now. :-)

After this point, I did a marathon of beading over two crazy sleep deprived weekend nights while my girlfriend was at work. I was there too of course. The Spot is a good place to bead,
especially since the apartment was stifling at the time. *Note: clean house more often.

Back to the mask. Here is the completed beaded base accompanied by my embellished swan, just to see if they actually fit together:

Although the colors go together fabulously, the two pieces obviously (or so I'm told) don't go together. The only really constructive criticism I got during the making of this thing was from Jenna earlier in the week. She graciously pointed out that they don't blend together and the shape of the eyes are in no way similar. After letting this sink in for a little while, my frantic crazy stressed out brain gave in and said.....well dang! I can still make the Friday deadline. Why not just enter the thing as is and finish the straps? And that's just what I did!


Here is the mask full view, complete with embroidered trim and fabric that have been edged with seed beads to add a clean line to the frayed edges. 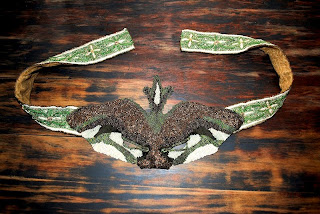 Side view showing the double knot for fastening: 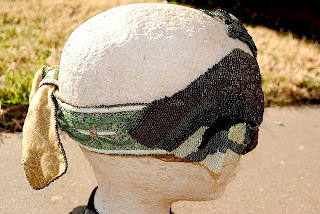 Detail of the eyes and nose: 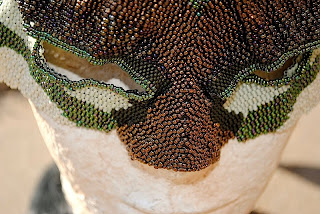 Detail of the forehead decoration: 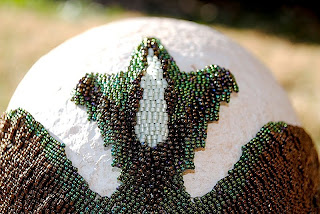 See! It looks like a moth, doesn't it? Either that or a bat. I decided on moth for competition purposes. 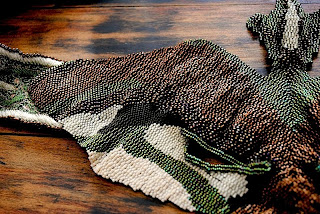 Can anybody tell me who left this dismembered head on the sidewalk? And what in the world is that on its face? 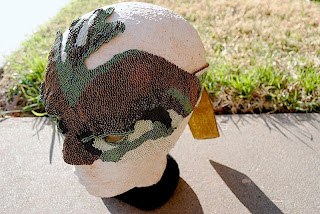 Well, there you go! Approximately 80 hours of work. One moth mask ready for entry into Beadwork VII: The Beaded Earth. Wish me luck! Any volunteers for human models???? Anybody?

The swan is an adventure for another day.
at 8:50 PM