.....hello. I've been in kind of a bum mood lately. I've been fully enjoying being able to bead all I want between jobs. However, I know that it's not going to last. I think this is the reason I've been way too lax on producing the tutorials I promised myself I'd make. I think I'm too much of a flake for my own good. I am a work in progress. Thank you all for being here to encourage me onward.

Today I've decided to post a Two for Tuesday, mostly because I spent yesterday ripping apart really old projects to recycle the beads. I should have been working on the BJP instead, but hey, plans change right?

This piece is called Josephine's Garden. I sketched the centerpiece while looking for Victorian inspiration on the internet in early 2010. I had a Victorian craft show I was going to that December and wanted some ideas. I finished this piece last summer after having created the centerpiece in the spring of 2011.

I hand cut the copper with my jeweler's saw, gave it a VERY light etching, soldered on the twisted wire bezel, and cut out the little triangle dangle. The plastic cabochon is glued into the center. (I know, cheating, but......no excuse here. Oops.) I achieved the patina by blackening the copper with the soldering torch and then using wire brushes and a flex shaft to make the copper reappear in areas. 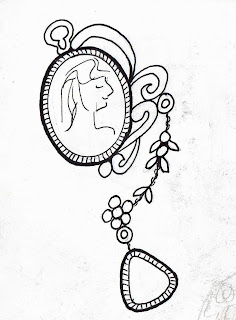 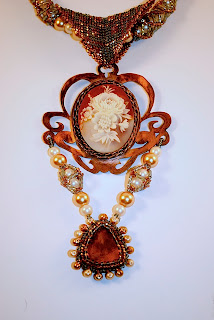 I obviously didn't use a profile cameo like I intended because black just didn't go with the metal. I am particularly proud of the beading on this piece. All of it was stitched in a 16 hour beading marathon!!! That's both Lion Kings and some weird Indie film I can't remember, plus several reruns of TV shows online.

The fold-over triangle bail took FOREVER, as most do anyway. The design on it was by whim. The herringbone bezel for the triangle drop was experimental, with beads popping up between the stitches. By proudest achievement was the bugle bead dutch spiral rope. I had to dig back to a really old issue of B&B to find any sort of instructions, (forgot the designer, sorry). However, I modified the stitch to make the ladders more open and strung glass pearls inside of the rope!!! I used Cynthia Rutledge's peyote ring design from a recent issue of BEADWORK for the toggle loop and modified it to use bugle beads instead. I also make a peyote toggle to match. This necklace was just one big AHA moment waiting to happen. :-) 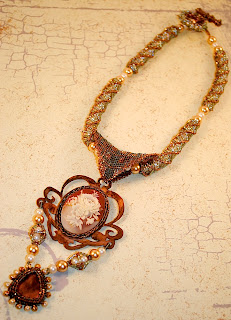 What do you think?

Also, wish me luck on my job interview tomorrow! I've never been a waitress before.

Email ThisBlogThis!Share to TwitterShare to FacebookShare to Pinterest
Labels: beadweaving, beadwork, I don't know what to do with myself now, peyote stitch, pointless doodles that turn out better than expected, sketches, tamara allison, two for tuesday, vanishing pearl, vanishingpearl