Welcome to the wonderful world of Allison's Antics, where procrastination abounds and new ideas are constantly left in the dust! This should be the new tag line for my life. (Shame on yourself, Tamara.)

I can't believe it's been four years since my last attempt at the Bead Journal Project. Wow. Let's get started shall we.

First of all, you might want to know what I've chosen for my bead embroidered theme. Well, I wanted to go small-ish. I have been sorely neglecting bead embroidery for the last couple years and want to ease back into the process. Sooooo.......always with a usable end product in mind, I chose to do an Art Deco styled necklace each month with three pendants. Each will depict a portion of one of Henry Moore's textile designs from the early 20th century. I just love the patterns and have wanted to make inspirational pieces for quite some....months.

Here is the piece I chose as inspiration for January. Why not just start with my favorite and go from there, right?

My former piece made with this design in mind can be seen here.

Earlier this week, I began the first stages of my year long project. I made a template of my 36 shapes (one large and two small for each month).......... 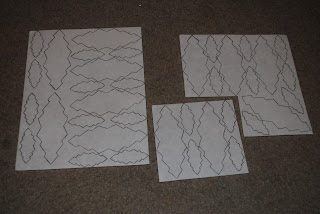 Then I traced over the Henry Moore textile design above. Did you know Lacy's Stiff Stuff is see through enough to trace an image directly from your computer screen? I didn't. I opened the image in Photoshop and zoomed in several times to find a segment that worked with my shape. 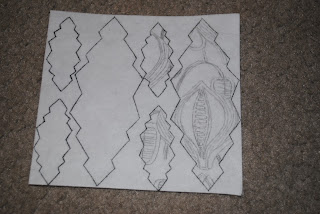 Next came coloring! *still a kid* 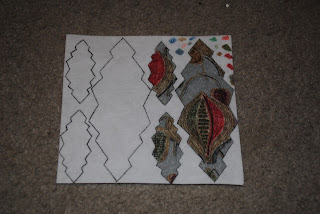 Last, I cut out the shapes. 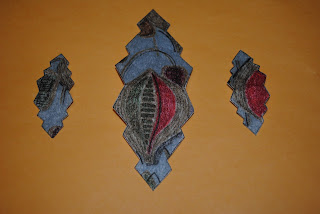 The plan is to embroider the shapes, while leaving some space horizontally to fold each shape in half and edge the sides. This might be easier to explain if I had gotten that far and had pictures to illustrate what's in my head. I fear I will start off the year a little behind. Hmmm....better get to work then. Anyway, they will be fabulous!!! And strung on....something......

Things I've learned so far:
1. I haven't embroidered much in the last couple years.
2. Despite attempting to start out small, I have relapsed into biting off more than I could chew.
3. I am almost out of Lacy's Stiff Stuff for other projects.
4. Henry Moore is still amazing.
5. Lacy's Stiff Stuff is see through.
6. Bic marker's could possibly have some ill effects on your senses. O.o
7. Manilla envelopes makes a much better backdrop than ratty carpet.