Beading to the Sound of Your Doctor's Voice

Good morning! I haven't gone to bed yet. I've been up all evening after a three hour post work nap. I swear this a miracle since today was my fourth Starbucks morning in a row. The exhaustion always sets in about 10 minutes after I get home. Only two more days until my next day off! There was a time when I used to take those for granted... 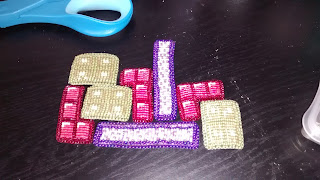 I've got to admit that they're looking better than I expected. Except the green 'square' blocks. The little bastards followed one of the cardinal rules of Beadwork to a T, 'Thou shalt never expect a gridded pattern to be perfectly square, ever.' I'll cope. I swear.

After realizing (from the start) that there was no possible way I was going to fit all 30+ pieces I plan to make on my single remaining half sheet of Lacy's Stiff Stuff, I knew I had to buy more beading foundation. Guys, I've pretty much stopped buying art supplies in recent years and just pull from my much diminished stash. This was a tragedy. I still had a miniscule amount of Fire Mountain credit but decided against ordering a sheet because the cost of shipping was almost equal in price to the one measly item. Instead, I bought some of Nicole's Bead Backing to try out: 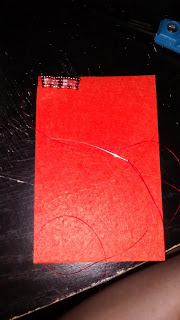 After all, what harm can come from trying new materials? I did get sick of Fireline and went back to Nymo before discovering that SoNo and K.O. are far superior materials.

Have a good day! Tonight's entertainment was Cressida Cowell's How to Speak Dragonese, audio book read (and voice acted) by David Tenant. I believe I like the portrayal of her characters better than the direction Dreamworks took, but both are good in their own ways.